Jump to Navigation Jump to Footer

The idea behind Israel Legacy Central began in 2012 when I retired after 40 dedicated years working in Legacy and Jewish philanthropy. This is our story. 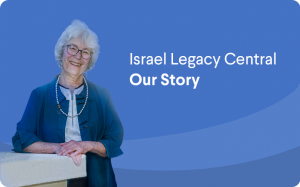 I had the personal good fortune during my 40 years in Tucson, including my work as director of the Jewish Foundation of Southern Arizona, to help hundreds of donors build Legacies. Then, just 2 days two days after my retirement from the Foundation in 2012, I made Aliyah and arrived to Modi’in, Israel with my husband Dan.

The next step of this journey had begun.

After arriving in Modi’in and feeling well-adjusted to my “retirement” in Israel, I set off in search for the central address for Legacy in Israel. After all, I was sure there had to be an office or organization dedicated to helping donors make a Legacy gift in Israel. Finding nothing, I then reached out to dozens of Israeli friends and associates with whom I had formed close relationships over the years. Several were heads of well-established nonprofits in Israel.

Feeling surprised but accepting that Legacy in Israel was not yet “a thing”, I began to broach the topic with everyday Israelis and philanthropic professionals alike. I vividly recall explaining how Legacy gifts are made and that there was no minimum gift size requirement. I spoke about the impact – sometimes transformational – that a Legacy gift could make on an organization.

The response was truly illuminating. Eyes would light up and excited nods of approval would follow. The idea for Israel Legacy Central was borne.

Just a few short years later, in 2016, Israel Legacy Central launched its inaugural Legacy workshop in Tel Aviv. Philanthropic leaders from thirty diverse organizations came together for a full day to learn, listen, and explore how they could get started with Legacy. Orchestrated together with our Israeli partner Midot, the event was a resounding success and left us no doubt that Israel Legacy was here to stay.

The response was truly illuminating – eyes would light up and excited nods of approval would follow.

Since that time, we’ve continued building on our early success. We’ve recently launched an updated Legacy Professional Development Program to help educate, train, and supports Israel based organizations – and have a number of exciting new initiatives upcoming.

In many ways, Israel Legacy Central is the fulfillment of a lifetime pursuit of mine to support Israel’s philanthropic causes. Through Legacy, we each have the opportunity to make a profound impact on Israel and its people. I invite you to connect with us and explore all that Israel Legacy has to offer.

Get our latest updates monthly in your inbox

1. The Israel department of labor and statistics.